Mixed Results at the friendly tournament at ISPP

Tougher opposition will be ahead!

Winning start to the season for the Panthers

An enthralling start to the season for the volleyball team as both the girls and boys' teams won at East West. The girls won in a three set thriller winning by only 2 points! The boys had a little easier run winning in straight sets, allowing a whole host of new players time to play and experience competitive volleyball. Some outstanding performances by some new and experienced players, we are looking forward to our next match against NISC:
Girls- Monday 2nd April
Boys- 4th April 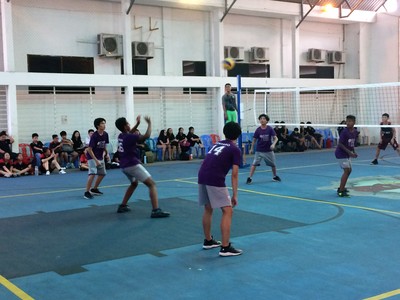 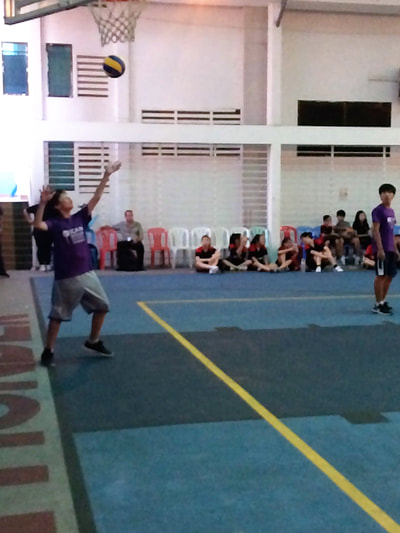 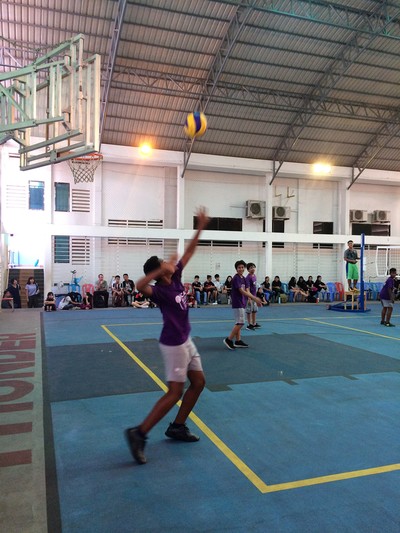 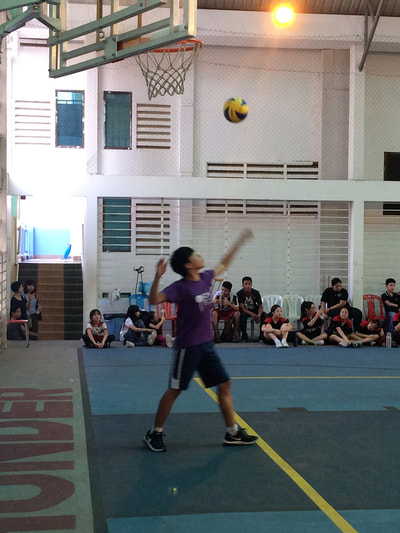 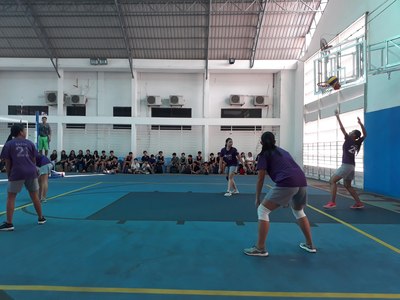 Medals won for the first time at ISSAPP Tournament 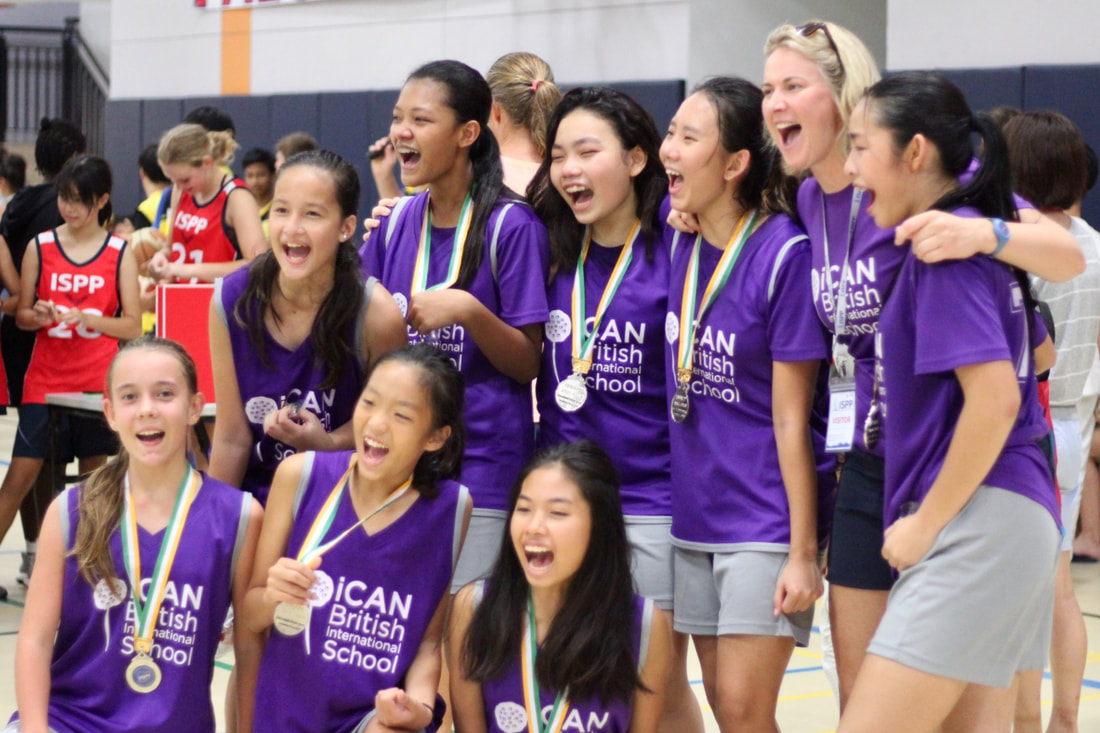 The weekend of basketball started with the Girls' B Tournament. Many were playing in their first competitive basketball games. They played three matches and although they did not get a win they improved with each match and became much more of a cohesive team.

Saturday morning saw the Girls' A Team play. With expectations high after their best season yet nerves were clear in the first game against LFRD. After a slow start they won convincingly showing what they are capable of in the second half. A physical match against CIA saw them dig deep for the win which then meant they needed to win in their last match against Logos to advance to the final. A strong start saw them advance 12 points clear but a rocky patch allowed Logos back into the game. However, the iCAN girls were not going to let this go and a strong few minutes saw them edge the victory to take them into the final against ISPP. Tiredness was evident but the girls still played some of their best basketball but despite their best efforts silver medal was to be. This has been the best result for the girls' team and it has been the product of three seasons of hard work- they should be extremely proud.

The Boys' A Team was a relatively new team and has had a difficult season. As such they went into the tournament seeded 8th. However, never underestimate our boys! Three periods of extra time later, two hard fought wins with baskets made in the last seconds took them to a 5th place finish which demonstrates the progress they have made in their debut season. All players were a credit to themselves, their families and iCAN and demonstrated not only a resilient and determined attitude but also an admirable team spirit. 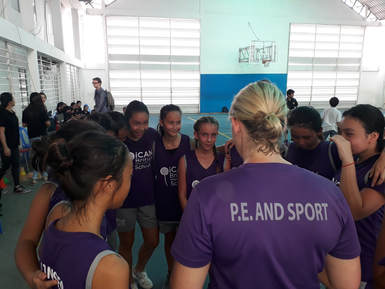 The boys went to East West this week who they had previously lost 19 points to 1. This week proved dramatically different with a much improved performance (40-20). A much more dynamic and attacking allowed them to get 20 points on the board which all coaches were happy with.

The girls also visited East West and won 33-16. What was most impressive about this game was the whole team contribution. The squad played a huge part in the victory and the passing and support play was excellent. This was a massive confidence boost for the girls and they look forward to their match against CIS on Monday 25th September.

The 2017 Basketball Season is upon us and below are the match dates for your diary:
Saturday 2nd September
Friendly Tournament at ISPP (boys and girls)

Wednesday 27th September
At iCAN (Boys and Girls B teams)

The Boys cemented their position as favourites for the ISSAPP Tournament this year with convincing victories over East West, Logos and ISPP in the final. A solid performance and great team spirit saw them beat ISPP in straight sets to win the tournament. The Girls' A team played the best they have this season narrowly missing out to overall winners East West. Their coach commented that he couldn't believe it was the same team they had played two weeks earlier as they had improved so much. A convincing win over Logos in straight sets meant confidence was high for the 3rd/fourth play off. Unfortunately this confidence didn't last long and despite beating Northbridge easily earlier in the week, it was not to be today. Both teams have much to learn from the competition and will be back even better at the final tournament on the 7th May.

Two great results at Northbridge this week with the boys and girls' teams winning their respective matches. The girls looked solid with a straight sets win. The boys faltered a little in the first set which meant they had to keep their cool to win in three sets. After a lapse in concentration in the first set they finished strongly to win the match.

Girls A Team vs LFRD

The Girls' A Team started the volleyball season with a a great result against LFRD. After a slow and nervous start they managed to win the first 27-25. However, this gave them the confidence to start playing the way they are capable of and the second set was won more convincingly (25-8). As it was a friendly we decided to play a third set for fun to give all players more game time. Another convincing victory in the third set with some excellent serving. The coaches were really proud of the huge leaps forward we have made since last season. Next week sees the girls travel to East West and ISPP. 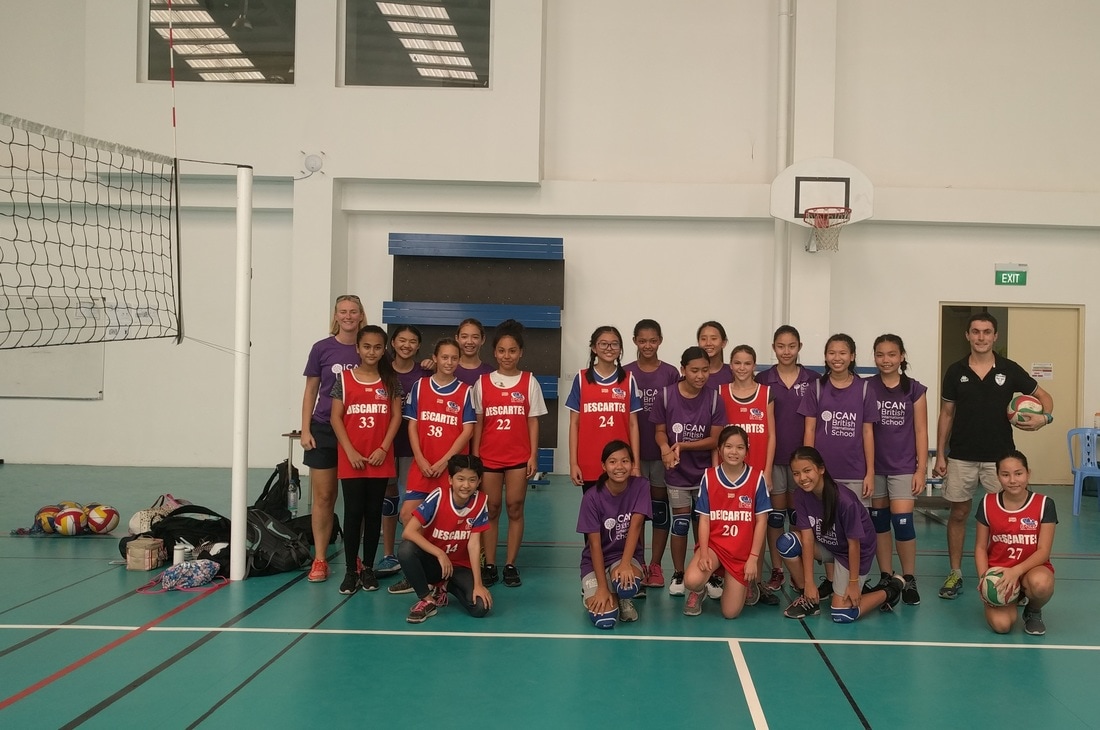 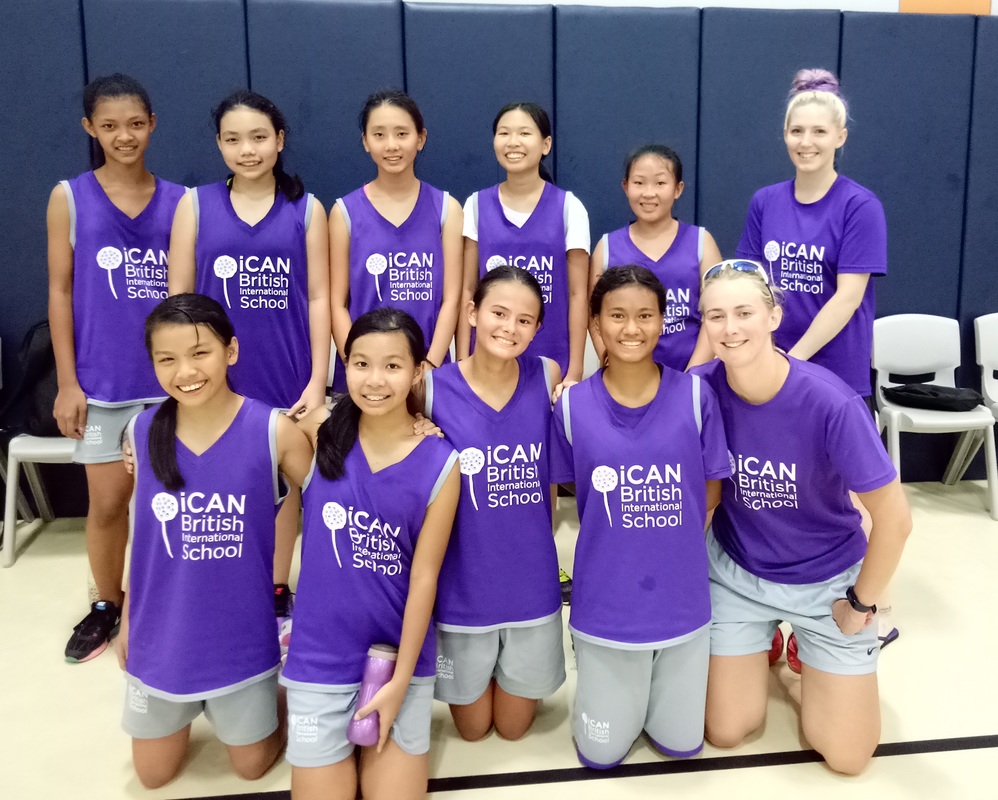 The annual ISSAPP basketball tournament will take place this weekend at ISPP:

The boys basketball season has seen a fantastic start with a strong initial performance against East West (the defending ISSAPP Champions) only losing by one basket in the final seconds.

This weekend saw the boys go to Hope and play against ISPP, Northbridge and Hope in a friendly tournament. Despite strong competition, a few injuries and some tired players they came away with three victories which increases our optimism for the season ahead. Go iCAN! 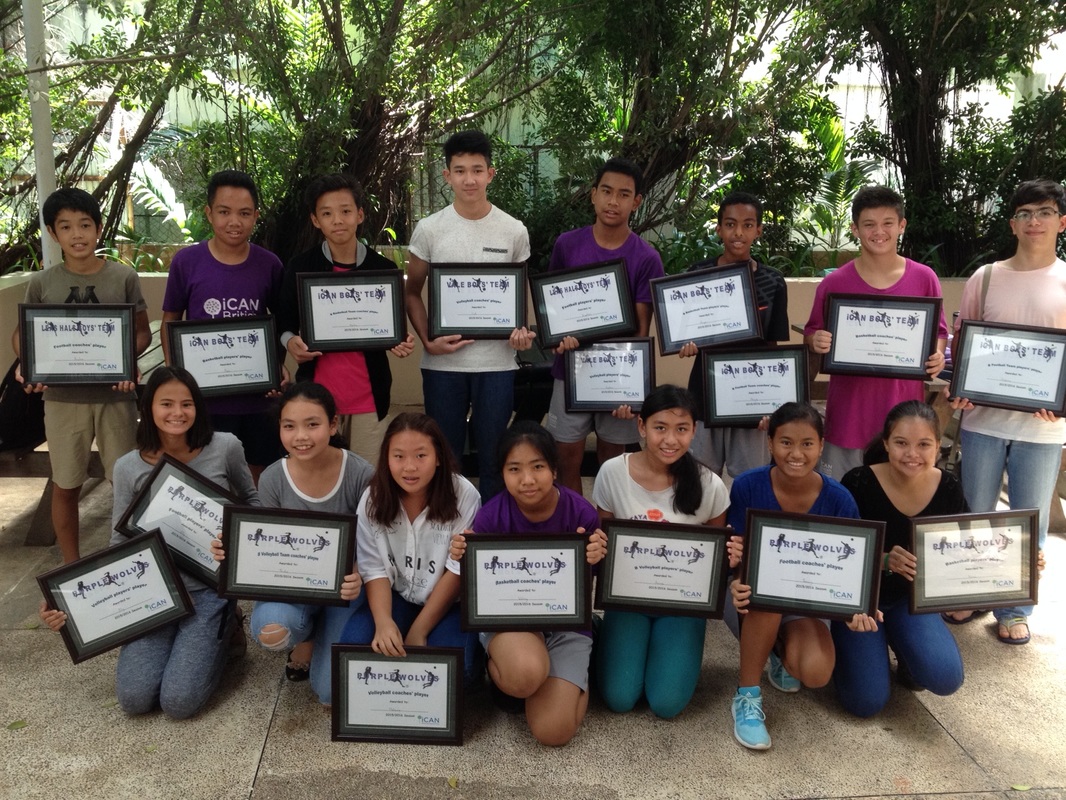 Following a very successful sports season the following learners were voted as either player's player or coaches player of the year:

Congratulations to all players on a fantastic season. With nearly 80% of all Middle Years learners competing in at least one sports team it has been amazing to see such a widespread participation and enjoyment of sport. Bring on next year! 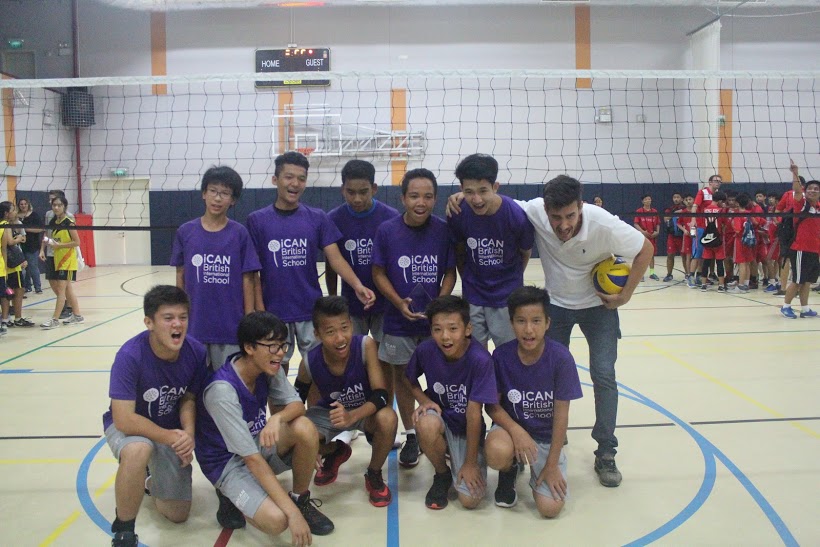 After a relatively easy first two match against LFDC and Logos iCAN knew that in order to get into the final they had to beat ISPP. iCAN did not have the best start and lost the first set. They battled hard back in to the second set and won the second set convincingly. Going in to the third set (which is only played to 15) we were confident the boys were able to come back and close the match. However, a poor start led to ISPP gaining a commanding lead. At 13-5 the spectators thought it was all over. However, the iCAN spirit never died and with some fantastic serving from Stephen and some calculated safe shots by Elit and Alex iCAN were able to score 10 points in a row to finish the match 15-13. An unbelievable comeback and one which prepared them for the final against East West.

Not as dramatic final but a solid performance saw the iCAN boys win the final in straight sets. A fantastic team performance and the court invasion at the end showed just how much support the iCAN team had. A really special way to end the sporting season. Well done boys!

Girl's volleyball team get their highest placing of the ISSAPP season 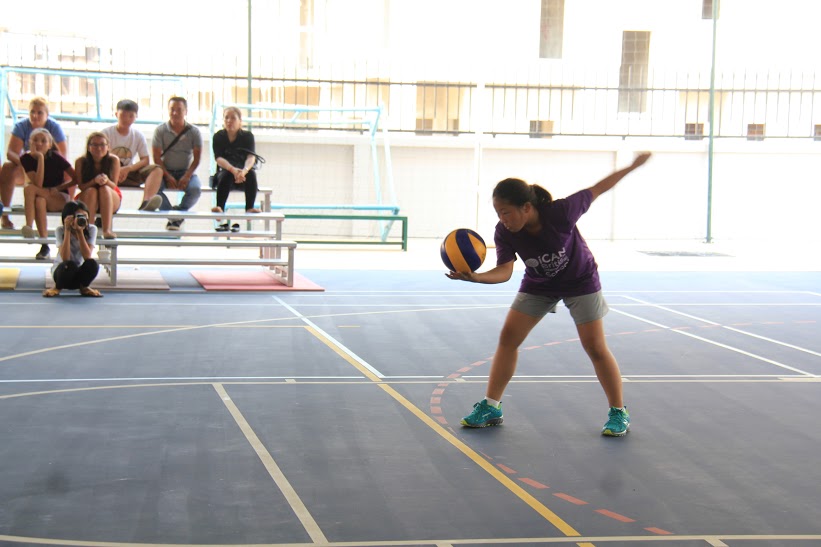 Expectations were high after a successful season and the girls gave a good account of themselves with their highest placing of the year- 4th. A convincing start to the group stage saw them beat ISPP B team in straight sets with some solid serving from Malaura and Chaewon. The second game was a lot tougher and Logos were a lot more skilled and experienced and despite a solid effort beat iCAN in two sets. The third match saw the iCAN girl's team play LFDC a solid team. A fantastic effort against a strong side saw them notch up a second victory and progress to the third/fourth play off against NISC.

A solid start gave iCAN the first set. Some silly errors and inconsistent serving led to NISC taking the second set. This meant that they would play to 15 in the third. A strong start by iCAN enabled them to quickly progress to 8 points and then before long it was 13-7. However, in a manner that was not dissimilar to the boys' ISPP game NISC came back and won 15-13. It was a day which demonstrated both the joy and heartbreak of sport. The girls were disappointed but this shows just how far they have come. To be competing for third place after each of the players had never experienced volleyball at the beginning of the season is a fantastic accomplishment. With a lot of the players coming from year 7 it makes next year an ever more exciting prospect.

Winning Week
It was an incredibly successful week for the Middle Years football team:
Boys A Team: 3-2 (win against CIA)
Girls Team 1-0 (win against Northbridge).

The girls had one target of playing a more attacking game and they did exactly this, keeping 80% of the possession. They controlled the game and were solid in defence with Naomi Bun gaining player of the match for her leadership and strength in defence.

The boys team played a lot more solidly in defence with star performances from Richiboth who refused to stop in defence until the final whistle. But player of the match went to Keita who has impressed with his adaptability, speed and his drive to get forward in his new position as striker.

Thursday 18th February
Girls and boys against East West at the 3G pitches (opposite the Australian Embassy) 4pm kick off. All supporters welcome!

iCAN learners have completed sports day 2016 and what an amazing day it was! The energy was electrifying from the moment we arrived at Northbridge. Each team sang their chant with passion which fed through to all the sporting events today.
Enthusiasm, sportsmanship and team work were in abundance; in events ranging from the sprint … to javelin … to the water relay. Our learners really did showcase not only their learning in PE but their passion for sport.

We had an incredible morning of sport at ISPP for the yearly YAPP athletics. Everyone had an amazing time and were very resilient during their sporting events. A huge thank you to those organising the event. We can't wait for next year!